I’ve a tendency to collect seeds from the fruits I eat since I was a kid.

And whenever possible I like to bury them in the soil instead of throwing them into the trash.

I imagine the seeds taking a nap in the darkness, recuperating from the trauma of being separated from the flesh.

And when the conditions are right, the seeds will wake up and send me a thank you sprout.

Just seeing their leaves catching the morning light makes me happy even if their sprouting is short-lived.

Their appearance keeps me from giving in to the despair of forest burning and animal harming, very much like how years ago a bunch of pigeons flapping around a friend’s legs had caused him to change his mind about taking his own life.

So I really believe in the restorative & healing powers of nature, and regularly stop to thank the shrubs and trees that I see.

We’re 47 years apart but connected by learning for our own benefit and for the benefit of all sentient beings.

To First Tutee these days, exposure to “Charlotte’s Web,” has moved his knowledge beyond dietary laws. His world view now includes seeing the pig as a living creature that has needs for friendship and a fear of death.

He also knows that dogs have names, ancestry and personality. Meeting one on his path these days is filled less with anxiety but more with curiosity.

The default question of “Will he bite?” has morphed into “What dog is this?” Words such as corgi, poodle, labrador and homeless dogs are taking up space in his head.

As the boy learns, trees are more than potential chairs or dangerous conductors during lightning storms. They are also homes to animals, perches where angels sit and sign posts for the wandering and the lost.

He tries to resist the impulse to turn every tree branch within his reach into monkey bars. Instead, he has learnt to pause and pat the trunk reverently. Last Sunday he made art with a tree’s fallen fruits.

Earlier on when we arrived at the Botanic Gardens for our English Language work, he didn’t run head on to play. Instead the first thing he did was to point out the corner table where he planned to practice spelling later.

The silent trees seemed to have a calming effect on him and collaborated to help an easily excitable boy set his academic intentions.

And the hive of activities – jazz concert, kids playing, adults dancing, dogs running and his own trekking up and down the slopes did not distract him but centered him.

He asked for the use of the cell phone to set the timer to revise his spelling, and later on chuckled with glee that he had cleared his revision sooner than he thought.

When the day ended, even though First Tutee claimed that he was very tired as we walked to the carpark, his eyes sparkled with amazement at the sight of a athletic looking dog whose gentle eyes were the same shade of deep brown colour like his fur.

Words are not needed in meetings like this because the mind and the heart are open.

Towards late afternoon of the lunar new year celebration, I thought of the chiku tree that my father planted years ago.

So I walked to the back of the temple to say hello.

And there she was, fruitful as ever, laden with Chiku fruits of all sizes.

Red paper craft hanging from her branches like ribbons on a maiden’s hair gave the old tree a touch of festive air.

I snapped a picture of her and caught the light radiating amongst her leaves.

So I stood under her for a while and listened. Memories of my late father pruning the chiku branches and my late uncle harvesting the fruits with his beloved black cat, Shou Shou, climbing alongside him came to me. 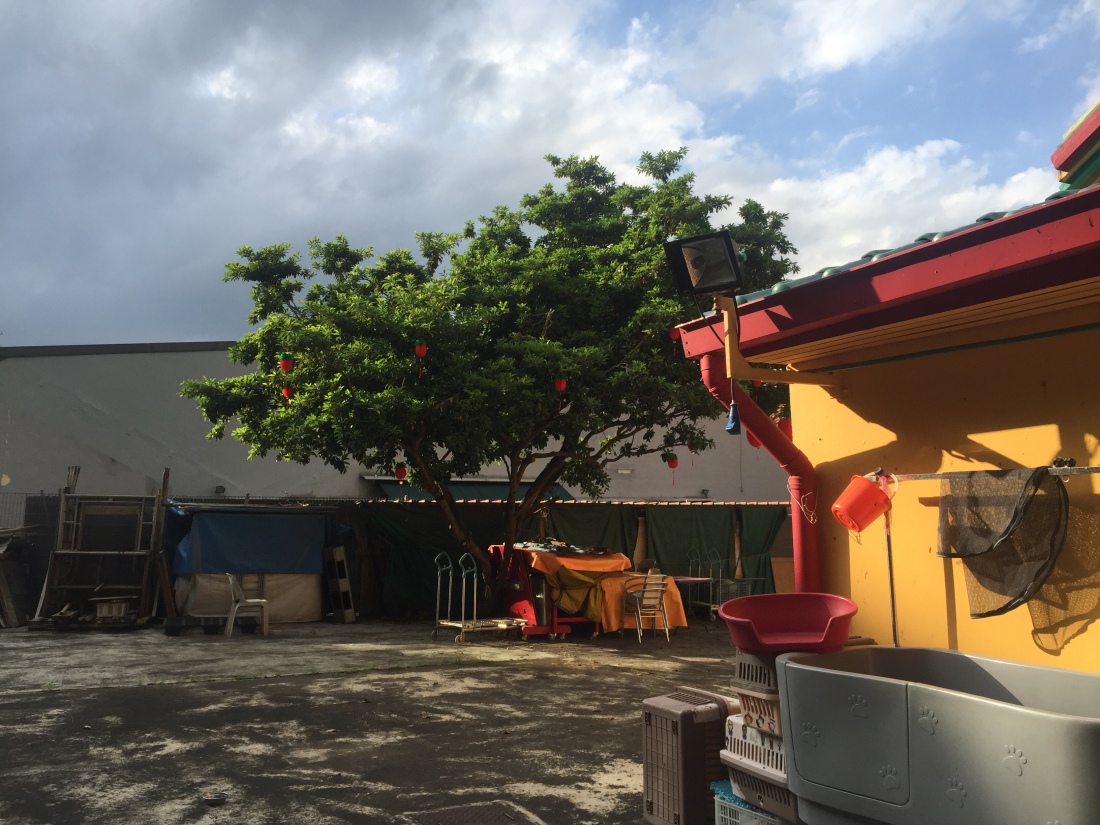 Year after year, the Chiku Tree welcomes Spring, and she’s now also the link to my ancestors & beloved animals.

I found a fruit on the ground and took it home with me.

“To be sensitive is to feel for people, for birds, for flowers, for trees – not because they are yours, but just because you are awake to the extraordinary beauty of things.”

The first thing that struck me when I entered the Yala Courtyard in Patan was the gorgeous Pomelo Tree.

Decked in her golden orbs, the tree stood tall & proud, a vision of a goddess in her resplendence.

In response to my admiration, the host in his generosity offered to pluck one fruit for me to eat.

I thanked him but said no, because seeing a tree this beautiful is already very sweet.

And being able to take a picture with tender-hearted beings under “my” first Pomelo Tree is so satisfying.

I had no wish to spoil that magical moment by plucking, cutting, tearing & devouring parts of her.

So the Pomelo Tree got to keep all her fruits while we enjoyed the privilege of just sitting with her.