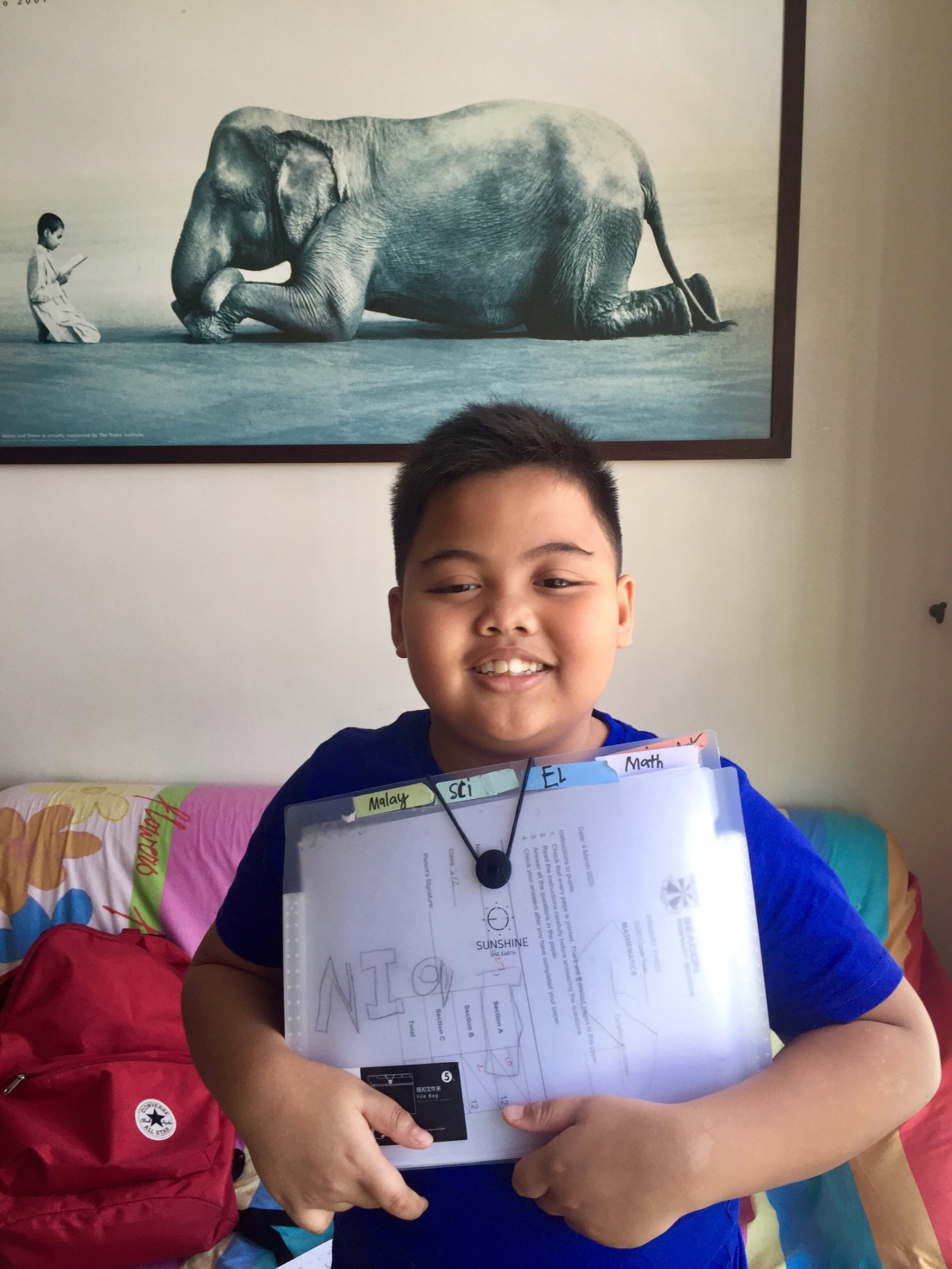 After showing me his spelling list for April, he asked if I would like to see the construction pieces he had brought along.

As it was the March break, I decided to lighten things up a bit and set him some construction challenges.

With those little plastic pieces, he created a series of objects for me: a camera with lens, a hover-board and a tent for outdoor camping which also doubled up as a land vehicle and boat when necessary.

And all that time as he fiddled with the pieces, he was also able to spell most of the new words accurately, by listening carefully to the word pronunciation and recalling previous spelling rules.

He was also able to recite Christina Rossetti’s poem which he had memorised last week while making a camera for me. The delight of mastery on his face when he delivered “Hurt No Living Thing,” fluently was priceless.

First Tutee: You mean like “grasshopper so light of leap”?

He was making an association with the word on his spelling list with a line from the poem.

I complimented him on his ability to make the connection and emphasized the consonant ending of “leapt” as I repeated the word to him. (The distinction between noun and verb form can wait)

He listened carefully for the consonant ending and added “t” to complete “leapt.” The light of understanding dawning on a boy when things make sense is precious.

First Tutee then asked me to name his final construction. I got him to describe fully & clearly what it could do because my naming would depend on his clarity of delivery.

After listening to his earnest description & demonstration on what the parts could do, I announced in a dramatic voice, “And your creation shall be called, “Aqua Terra!” “Aqua” means water and “Terra” means earth in Latin.”

When he saw the spelling of “Aqua Terra,” he smiled at them as though he was looking at a baby.

After that he went on to copy out the first 2 stanzas of the poem to be learnt by heart for the week. It was Diane Ackerman’s poem, “School Prayer.”

Copying out a poem encourages him to read and hold the words and phrases in his head before putting them down on paper. This practice trains visual memory and strengthens his psycho-motor skills. It also has a calming effect on him.

And in the calmness of noting down Diane Ackerman’s words, First Tutee shared information on school life and that he’s learning to play “Ode to Joy,” in his violin classes.

Me: Wow! Ode to Joy by Beethoven? It’s also the EU anthem!

First Tutee: Yes! How do you know? My music teacher told me.

I started humming “Ode to Joy,” and he was really impressed & tried to hum along. I told him he can even try to set the poem he has memorised to music. He tried singing “Hurt No Living Thing,” to the tune of “Ode to Joy,” and laughed heartily at his attempts to match words to tune.

“You mean I can also use Rainbow Butterfly song to match the poem?” he clarified, obviously making creative adjustments in his head.

I went on to show him videos of a flash mob orchestra performing “Ode to Joy,” and jazz artist, Bobby Mcferrin singing JS Bach’s Prelude while his audience sang “Ave Maria.”

The 9 year old boy was entranced by the synchronicity & blending of music & voices.

He was very keen to know how people could play musical instruments and sing without looking at their score sheets or lyrics.

His question gave me a chance to extol the virtues of learning by heart.

By committing words, sayings and music scores to memory, we free up space for spontaneity and fun, while training our mind to learn harder things.

When he got home after English lesson, he did not ask for a rest. He went straight for his violin and starting practising “Ode to Joy.”

Later in the evening his granduncle called to say First Tutee would like to play “Ode to Joy,” at Ms Ong’s place in his next English lesson. And yes, he would also learn the first two stanzas of “School Prayer,” by heart.

So even as news of viral infection inundated the media & pictures of frantic stockpiling of physical necessities disturb our sense of security, making time to feed our children’s intellectual & emotional needs could also be as rewarding & essential as having food in our pantry and toilet paper in our storeroom.

This morning First Tutee was reading “Charlotte’s Web.” In a matter of 24 hours, his young brain has been exposed to EB White, Beethoven, Bobby Mcferrin, JS Bach & Diane Ackerman, and perhaps much more learning in the days to come.

Our fears of covid-19 are valid, and we are tempted to hoard food & medical supplies, and even become angry & sad at our helplessness against an invisible threat.

But perhaps we can also try to balance fears with pockets of joy by attending to the needs of others. And sometimes these needs can be as as simple as just showing a child how to hum “Ode to Joy.”